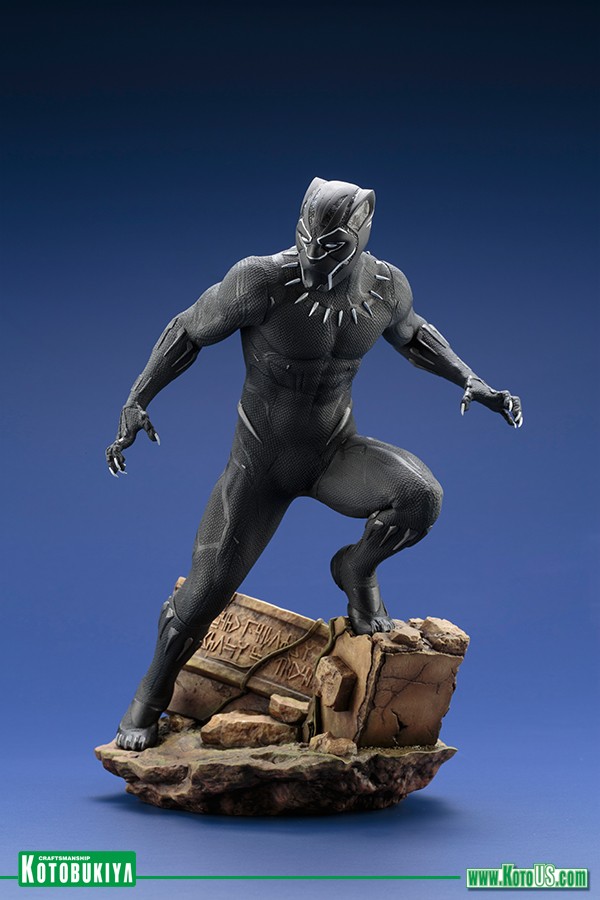 Kotobukiyas next elite ARTFX Statue returns to the Marvel Cinematic Universe and celebrates the breakout hero of 2016s Captain America: Civil War and the star of his own upcoming blockbuster, BLACK PANTHER! A prince of the mysterious nation Wakanda, TChalla was thrust into the spotlight when a terrorist attack killed his father and elevated him to the throne. Now he holds the dual responsibility of ruling his people as king and protecting the world as the costumed Black Panther, and its that hero who claws his way to you now in a glorious 1/6 scale statue representing 2018s BlackPanther film!

A hero unlike any other in the Marvel Cinematic Universe, Black Panther stalks his prey across ancient Wakandan ruins and will never let his target escape. TChalla is frozen in place as he steps lightly over the rubble, using his feline grace to move silently and quickly. Enhanced with cutting edge vibranium technology, Black Panthers incredibly detailed black body suit combines a subtle texture with reinforced sections and decorative silver elements, not to mention wicked claws that can slice through nearly anything. The suit highlights the heros muscular physique and his tensed pose as he prepares for action. It also extends over Black Panthers head with its menacing feline face plate and subtle earprotrusions to complete the overall look.

Black Panther stands over 12 inches tall (1/6th scale) atop his Wakandan jungle ruins base. Get your hands on this technologically advanced hero and star of the Marvel Cinematic Universe!