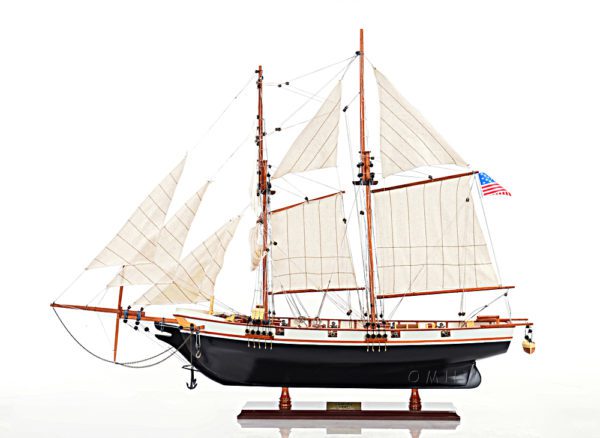 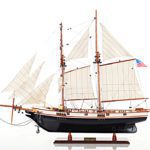 Dimenssion: L: 35 W: 8.3 H: 26 Inches
History: The Harvey was built in 1847 in the state of Maryland. She was an able sailer working out of the port of Galveston Texas. At the turn out the Century she was making several voyages a year between Galveston and the ancient Jewish port of Jaffa which at the time was still under the Ottaman empire. Her main cargo was hemp used to make ropes for the rigging of ships. She exemplified this class of roving privateers, overtaking and capturing British merchantmen laden with cargo to support the British expeditionary forces then attempting to recapture the former colonies. She had a successful career, first as a warrior and then as a cargo carrier. She displaced about 225 tons, and had a length of 97 feet, a width of 25 feet and a depth of less than 11 feet. With the end of the war, transatlantic trade resumed, and the Baltimore clipper evolved over the next 30 years to take the form of larger cargo carrying packets. These had similar hull lines and were longer, slimmer, and faster than older merchant ships.

Be the first to review “Harvey Painted”