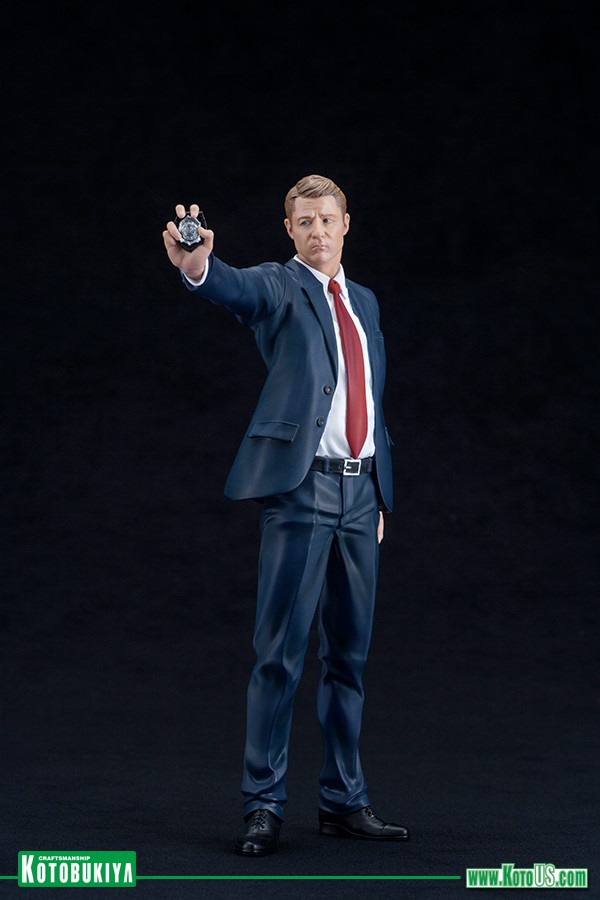 A KOTOBUKIYA Japanese import! Kotobukiya is taking its popular lineup of comic book and movie characters based on DC Comics properties to a whole new world with the introduction of statues from DCs Fox television show Gotham. The first character from that superhero drama being recreated in thefantastic 1/10th scale ARTFX+ format is none other than Gotham Citys tireless hero JAMES JIMGORDON! A detective and former member of the army, Gordon is the one honest cop trying to make a difference in a city of corruption and crime. Without special powers, gadgets, or millions of dollars he uses hard work, instincts, and contacts to solve cases and put bad guys behind bars. The Jim Gordon ARTFX+ Statue celebrates the character and his heroism with a fantastic likeness of actor Ben McKenzie!

Standing up to crime the only way he knows how, Detective Gordon hits the streets. Jim wears his signature blue suit with white shirt, red tie, and black shoes and belt, and you can see how rumpled and creased it is from his late nights and long shifts. He stands in a rigid pose, turned sideways to present a smaller profile to potential targets. His arm extends straight out, his head swiveled to stare down the criminals in front of him. You can display Jim in two different ways with interchangeable hand parts; he can either present his Gotham City Police Department badge to make an arrest or wield his service pistol. Either way the detective has a fiercely determined expression on his face that perfectly captures the look of Ben McKenzie. Gordon stands just over 7 inches tall (in the ARTFX+ 1/10th scale), and magnets in his feet provide perfect stability on the included display base. Jim is a great addition to your Kotobukiya DC collection, and hell pair perfectly with other upcoming Gotham ARTFX+ statues like Penguin!