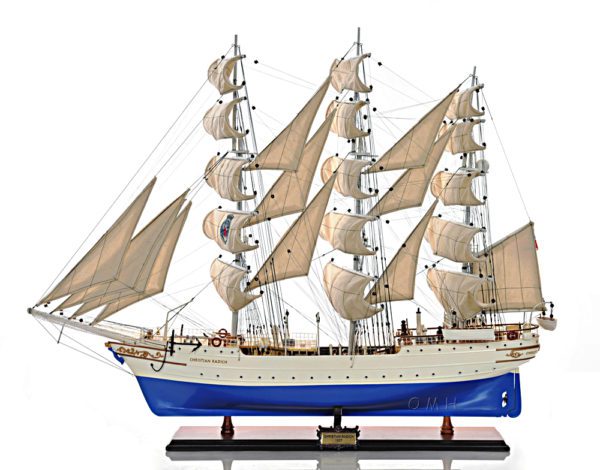 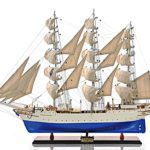 Dimenssion: L: 37 W: 11 H: 30 Inches
History: Launched in 1937, just only two years before the start of World War II, the sail-training ship Christian Radich was named for a patron of the Christiania (later Oslo) Schoolship Association who left a bequest of 90,000 Norwegian crowns in 1915 for the building of a schoolship. The ship made one short cruise in 1938, followed the next year by her first transatlantic voyage, to New York for the Worlds Fair. Christian Radich returned to Norway in late 1939, only to be taken over by German occupation forces at Horten in April 1940. Wars end found her capsized at Flensburg, Germany, stripped of virtually all metal and fittings except her shell plating and decks. After 70,000 worth of salvage and repair at her builders in Sandefjord, she resumed sail training in 1947. One of the most regular participants in tall ships races and other events in Europe and North America, by the start of her second half century under sail, Christian Radich had been both witness to and a catalyst for the remarkable resurgence of interest in sail training and traditional sail generally worldwide.

Be the first to review “Christian Radich”